Watership Down Stud was founded by Andrew and Madeleine Lloyd Webber in 1992.

With the aid of racing manager, Simon Marsh, they renovated the old stable yards so that they were suitable for foaling mares and set about fencing thousands of acres of grassland. Much of the land had only been grazed by sheep and boasted some of the finest grassland in the UK.

Since the stud’s completion, their policy has been to buy and develop top-class bloodlines, often selling the colts and keeping the fillies which they breed. 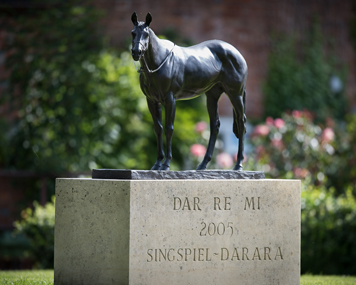 Their first major broodmare purchase was Silver Lane for $750,000 in 1993. She was carrying Black Hawk, who won over £3.5million in prize money and later produced Shakespeare, who was sold as a yearling for 2.2million gns.

A year later, Watership Down purchased Darara, a Group 1-winning daughter of Darshaan. She went on to become one of the world’s best broodmares ever, producing four Group 1 winners including Dar Re Mi, who carried the Lloyd Webbers’ colours to Group 1 glory on three occasions. Darara also bred a colt by Sadler’s Wells who sold for 3.4million gns as a yearling in 2000.

Over the years, Watership Down Stud has developed to include modern day facilities including horsewalkers and a huge ménage perfect for yearling sales preparation.

Kiltinan Castle Stud was purchased by the Lloyd Webbers in 1996. Andrew was struck by the beauty of the castle and its stunning grounds with the River Clashawley flowing down from Slievenamon, one of Ireland’s most unspoilt mountains.

Madeleine was already sending mares to stallions at Coolmore Stud, which is adjacent to Kiltinan, and the decision was taken to develop Kiltinan into a stud farm.

Thanks to its rich pasture, Kiltinan is perfect for nurturing young stock and provides the perfect location for mares visiting Coolmore as well as other leading stud farms in Ireland.

Watership Down Stud-owned mares have produced 186 foals which between them have won over £20million in prize money.

T he foaling season is well underway at both [...]

T oo Darn Hot has landed in Australia with [...]